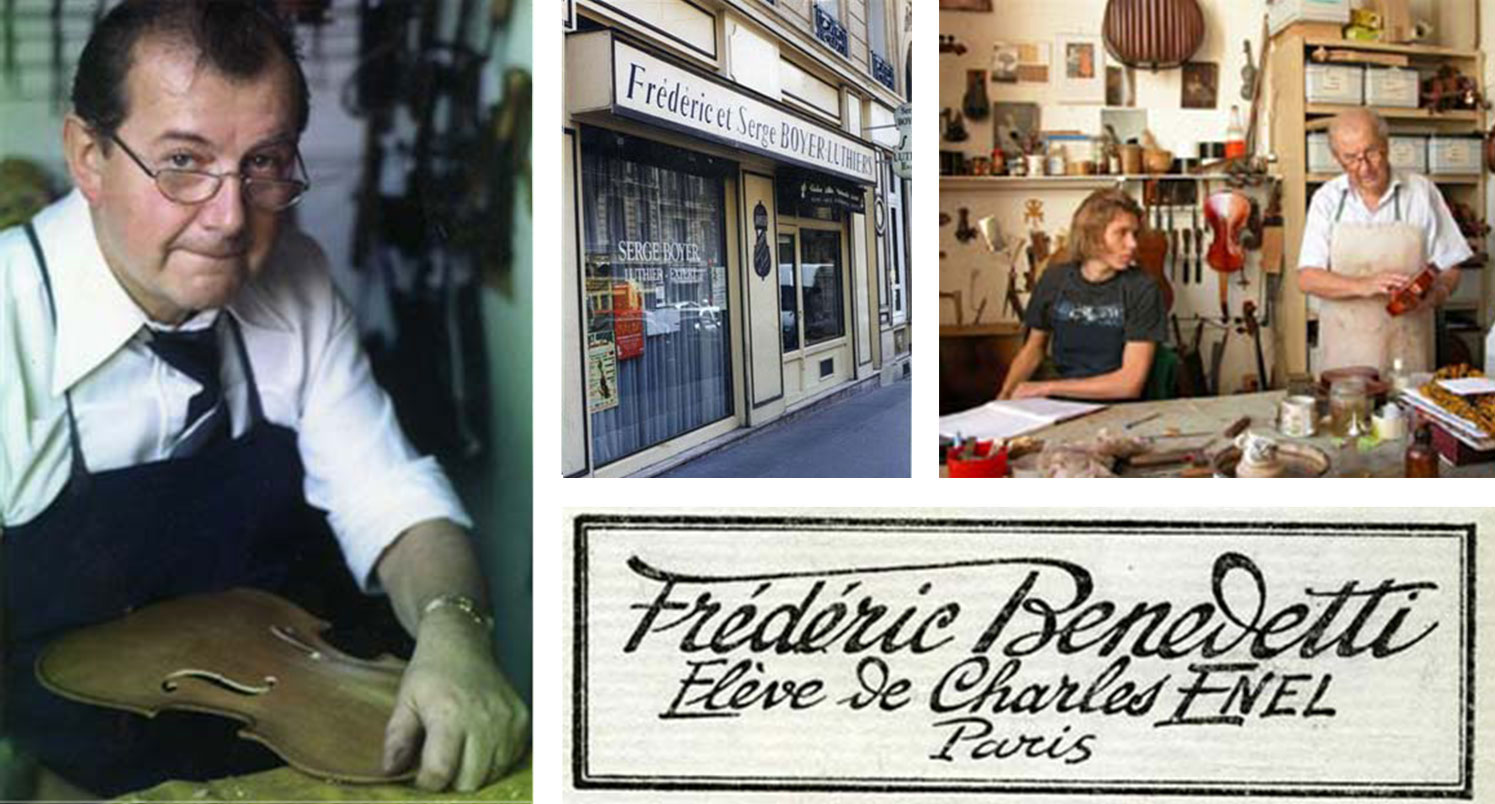 Born in Prague January 14, 1926, Frédéric Boyer is already part of a musical family, his stepfather Fernand Benedetti is a cellist at the Opéra Comique and his half-brother René Benedetti, also a cellist will become a soloist at the Paris Opera. Frédéric begins to play the double bass.

One day in his sixteenth year, he goes to a violin maker to have his double bass repaired and there it is revelation for him.

1942: He joins the famous Parisian workshop of Roger and Max Millant.

1943: He goes for apprenticeship to Mirecourt during the German occupation.

For nearly 5 years, he learns violin making alongside René Jacquemin and bow making with Louis Bazin.

1948: He returns to Paris where he is hired by the Enel House.This is one of the biggest violin making companies of Paris, and by Charles Enel and Pierre Enel (Charles’ cousin), he learns to build violins in the inspiration of the old, to restore and appraise them.

1954: This collaboration will unfortunately end with the death of Charles Enel. Mrs Enel, his wife offers Frédéric Boyer to stay in the workshop, this transmission is like a succession of a father to a son …

1960: Mrs. Enel dies and the heirs, naturally offer Frédéric Boyer to buy the workshop as a whole. From then on, Frédéric Boyer devotes himself to his passion, manufacturing in the inspiration of the old Italian masters.

In the years 1960-1965, Frédéric Boyer decides to produce only violas up against a market in strong growth and lives this period as true happiness. He permanently has under his workbench supplies (backs, tables and heads) in the rough, and when he sees a viola, preferably Italian and of the 18th century,  the very same evening, he begins a replica of it, in the way of the painter sketching out a painting on-the-spot.

At that time his life is punctuated by 2 hours of manufacturing in the morning and as much in the evening and each month a viola is made.

1970: violin making experiences a revival.  We should bear in mind that after the second world war,the violin makers of Mirecourt had refused to transmit their art to their descendants, the profession being very difficult and not very remunerative. For lack of young violin makers to take over, Mirecourt will gradually fall asleep counting today only a few violin makers.

Frederic Boyer will build throughout his career more than 200 violas, 50 violins and 5 cellos.

Continuing in the tradition of the Enel company, co-founder of the EILA, he will become its member and from the70’s will take part to congresses in the United States, in Russia, in Germany… Although preferring like many of violin makers his art to the society life, he will bring back memories from the exhibitions of old instruments, discussions with his colleagues, tha , viola after viola, will result in the improvement of his  models, his varnishes and of course the tone.

Frederic Boyer never plans any order of instrument. When a musician asks him to reserve a viola for him, his answer is: “I will call you when an instrument will be ready”.

A way for no constraints, no imposed colour,no model, nothing,only freedom to create,to improve each instrument according to his inspiration, the creator’s true happiness.

At the same time, the company Boyer negotiates a good number of old instruments  like Antonio Stradivarius, Joseph Guarnérius, Andréa Guarnérius, Nicolas and Hieronymus Amati… which allows Frederic Boyer to be devoted to his research without too many concerns.

From his bow making training with Louis Bazin in Mirecourt, he will keep a passion for bows and today, the company Boyer still deals with the negotiation of bows of great value.

1981: Serge his son comes back to share with Frédéric the workbench and takes over the management of the house in 1984

From that date, Frédéric devotes himself to his passion of copyist until his death in 2005.

SOME OF FRÉDÉRIC BOYER'S INSTRUMENTS